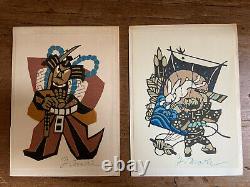 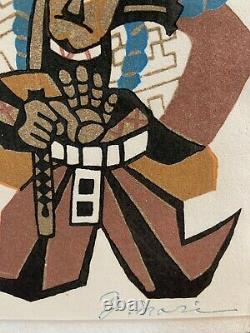 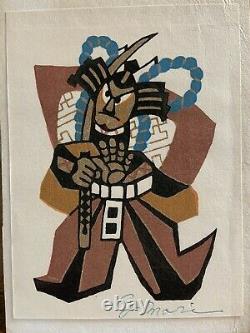 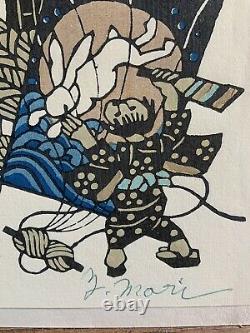 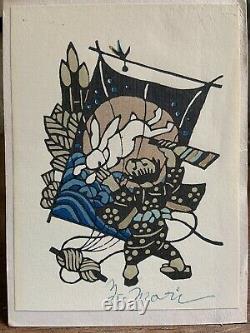 Yoshitoshi Mor i was a 20th century Japanese artist who specialized in kappazuri stencil prints. For many years he belonged to the Mingei folk craft movement, where he produced stencil-dyed textiles and other textile arts.

It was not until the 1950s that Mori began to work with paper, yet he quickly became known as one of the foremost artists of the Sosaku Hanga movement. Yoshitoshi Mori is said to have influenced several major 20th century print artists, including Shiko Munakata and Hiromitsu Takahashi. Mori's prints depict the past world of Tokyo's plebeian lowlands, the so-called Shitamachi, with its festivals, craftsmen and women of the demimonde. The mainstay of his great talent lies in his ability to not merely capture detail, but to boldly evoke emotions through his highly stylized designs.

Mori exhibited his works in numerous one-man shows in Japan in the 1960s and took part in 30 international exhibitions between 1957 and 1977. Within the United States, his work can be found in the permanent collection of the Art Institute of Chicago, Los Angeles County Museum of Art, Museum of Fine Arts Boston, and the Museum of Modern Art in New York, to name only a few. These two pieces seem to have been mounted at the very top edge of each print on thicker cards made of handmade washi paper. The cardstock was written on--like a greeting card--and sent to the former owner, who framed them and hung them on the wall.

The stencil prints themselves are in very good condition, and are signed by the artist (without the red seal that is often present). Beautiful, vivid colors on each. One image is of a samurai, the other is a child preparing to fly a rabbit kite. They both measure 4.75" by 6.5" Please ask me any questions you have. The item "Pair of stencil prints hand signed by Yoshitoshi Mori (1898-1992) 1970s" is in sale since Saturday, August 15, 2020.