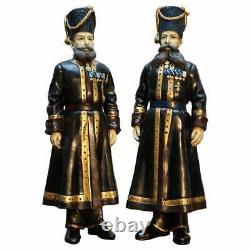 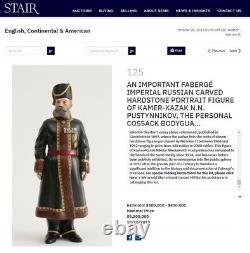 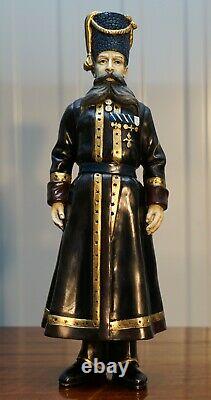 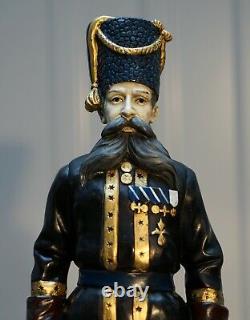 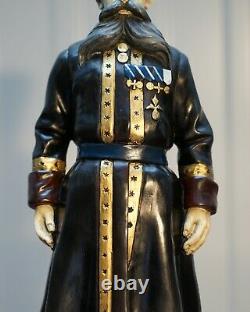 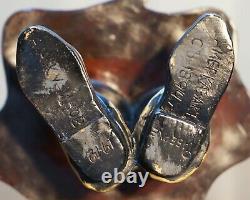 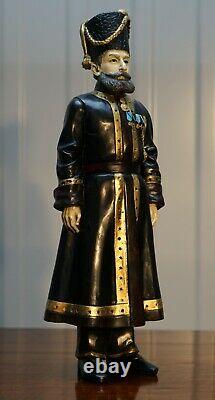 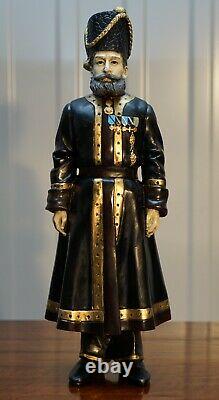 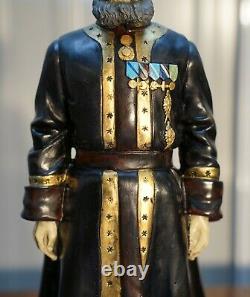 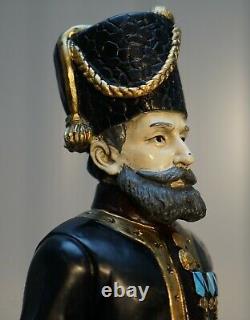 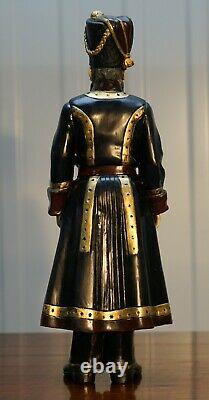 Royal House Antiques is delighted to offer for sale this stunning, very rare and highly collectable pair of Faberge signed cast and cold painted bronze statues of A. Pustynnikov, personal Kamer-Kazak bodyguards of Dowager Empress Maria Feodorovna and Empress Alexandra Feodorovna. These expertly made statues are as mentioned of A. Pustynnikov in dress parade uniforms with badges and medals, the coats trimmed with Imperial eagles, the cockaded fleece hats with gold braid, inscribed in Russian on the heels and soles of the boots'Kamer-Kazak since 1894/A.

The precise origin of these figures, which appear to be copies of or models for the well-known Fabergé hardstone figures of the Kamer-Kazak guards of the Empresses, is something of a mystery. Commissioned by Emperor Nicholas II in 1912, the hardstone figures were portraits from life, the guards visiting the studio of Fabergés sculptor Boris Frödman-Cluzel to pose for the artist, who modelled them in wax.

The figure of Kudinov remains at the State Pavlovsk Museum inv. These bronze figures may have been produced as further models, in addition to those in wax, perhaps so that the colour palette could be settled upon, bronze being easier to paint than wax. Fabergés close association with the Woerffel lapidary and bronze foundry would have easily facilitated this extra step in the process. An interesting comparison is provided by the two figures of The Ice Deliverer after the model by G. Savinitskii, one in silver from the workshop of Hjalmar Armfelt, the other in various hardstones, both authenticated as Fabergé-produced objects by Francois Birbaum in 1925 and now in the Fersman Mineralogical Museum, Moscow inv.

It is believed that the silver sculpture was produced first. Finally, it is known that at least one of the Kamer-Kazak guards was in fact modelled in metal.

In 1927, a metal figure of Kudinov was found in the Amoury among objects which had belonged to the Imperial Family, according to T. Fabergé I ego prodolzhateli, St Petersburg, 2009, p. 96, the authors noting that it is possible that this is a silver or bronze model of the hardstone figure of the Kamer-Kazak Kudinov. While it is suggested here that these bronze figures probably served as models for the hardstone figures, it is also possible that they were made after the fact and possibly given to the Kamer-Kazak guards themselves, or perhaps even to the young Tsarevich as toys, reminders of his mothers and grandmothers exotic and imposing guards, who must surely have fascinated him. In any event, their creation almost surely pre-dates the mid-1920s, when the figures were separated and that of Pustynnikov made its way to the West.

Please note all measurements are taken at the widest point, if you would like any additional or specific measurements, please ask. Royal House Antiques is a privately owned family ran business founded in Wimbledon SW19 and now based in Pulborough RH20. We specialise in finding, restoring very fine luxury antique leather seating, along with every single other type of antique ranging from the 16.

We also stock a number of designer brands such as Fritz Hansen, Ralph Lauren, Cavalli, Charles & Ray Eames, Vitra, David Linley, Rolex, Tiffany, Jager Le Coulter and so on. Please view the very detailed pictures as they form part of the description pertaining to the condition. Royal House Antiques cannot be held liable for any independent assumptions made regarding the items we sell, if you are unsure on any point, please feel free to ask for clarity. Please note vintage period and original items such as leather seating will always have natural patina in the form of creasing and wear, we recommend annual waxing to ensure no moisture is lost, also hand dyed leather is not recommended to sit in direct sunlight for prolonged periods of time as it will dry out and fade. COURIER, LARGE ITEMS ONLY THAT CANT BE POSTED.

Whomever delivers will always require help on the larger items to unload, the price you will be quoted will always be based on this assumption, if this is not possible, please let us know as it will affect the price to send a two-person team. The item "PAIR OF RARE IMPORTANT STATUES SIGNED FABERGE 1912 RUSSIAN KAMER KAZAK BODYGUARD" is in sale since Friday, July 9, 2021. This item is in the category "Antiques\Metalware\Bronze". The seller is "royal-house-antiques" and is located in Pulborough.