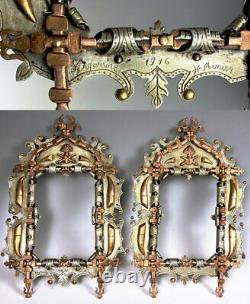 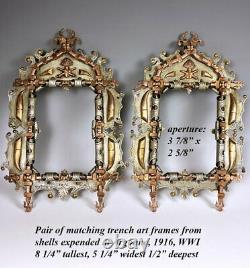 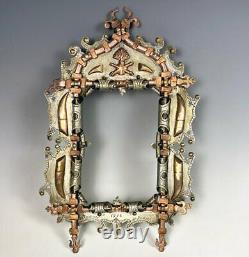 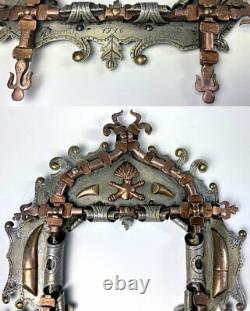 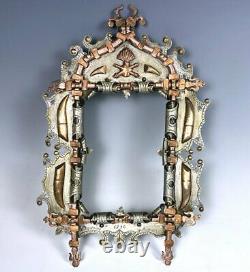 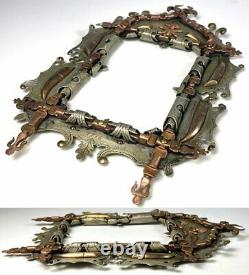 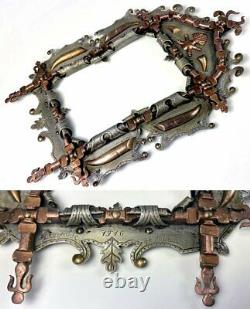 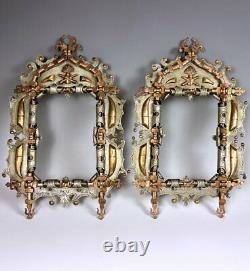 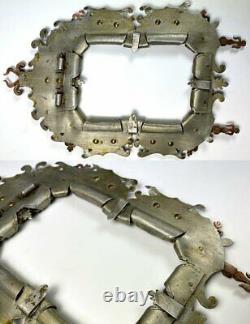 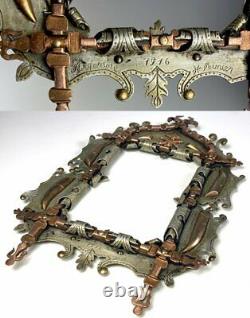 Pair, 2 Antique French Trench Art Frames, Spent Shells from Argonne Battle, 1916, Artist signed. All items and photos are the express property of Antiques & Uncommon Treasure. No reproduction without prior written consent. We'll be sending out sale notices and special deals to our'Favorites' customers. The battle of Meuse-Argonne was fought from September 26, 1918 until the Armistice, November 11, 1918 which ended WW1 - a total of 47 days. Argonne was the largest offensive in US military history, involving 1.2 million USA soldiers. Second deadliest battle in US history, over 350,000 died there. It was pivotal in bringing an end to WW1. But in 1916, while the British battled in Verdun, the war was less crushing in Argonne. Soldiers calmed themselves by making "trench" art objects while they awaited the next barrage from German troops. The remaining trench art from WW1, like this pair made by a French soldier, remain as a haunting reminder. Mortar shells, rifle shells and points. One has no way to know if any of this artillery met its aim.

Heartache and loss, and now and then a necessary'art'. Munier, a French soldier in 1916 at Argonne. Later on, 2 days after the Meuse-Argonne campaign began, my paternal great-uncle was killed in battle in that region.

His parents came from Switzerland, and he was born in America, died in Northern France not long before WW1 ended, and not far from his own grandparent's home in Switzerland. I found the frames in France. The old photo of German soldiers in Argonne, 1916, gives little view of the devastation they wrought, and of their own demise by war's end. Who could have predicted the Americans could end it on that very battlefield, allies to those many other Nation's soldiers they joined to fight. Very good to excellent for age and type. I've never been drawn to trench art, until this pair of frames. The work is quite incredible. The history matching them, also incredible.

Spanish Flu, other diseases of a long drawn out battle front; bullets and artillery flying. And this man made these works of art. It is visible that they were made to have easel stand at backside.

Made or never finished, who knows. There are tabs to hold in a photo and a cover glass if desired. Measurements are noted on our photos.

We're easy to deal with. Our fine inventory is very important. And your ranking of our performance is also very important! We wish to keep our 4.9 - 5 star ratings in all categories.

We always insure our items BUT, more importantly, pack them extremely well knowing that most are not replaceable. Please remember that when leaving DSR ratings. Icon here or above to see more of our inventory, offerings and venues. We have a HUGE assortment of the finest antiques to be found online, all at your fingertips with Antiques & Uncommon Treasure. _gsrx_vers_631 GS 6.9.8b6 (631). The item "Pair Antique French Trench Art Frames, Argonne Battle Spent Shells, 1916, Signed" is in sale since Thursday, July 22, 2021. This item is in the category "Collectibles\Militaria\WW I (1914-18)\Original Period Items\France". The seller is "antiquesuncommontreasure" and is located in San Marcos, California.