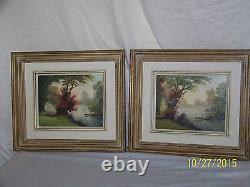 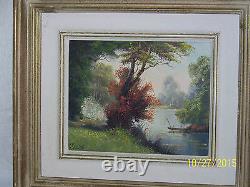 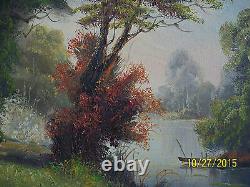 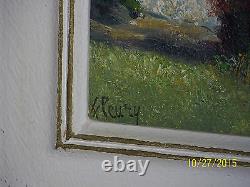 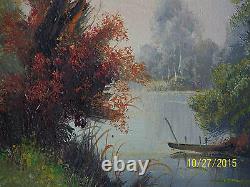 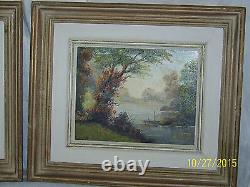 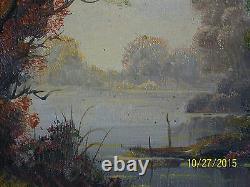 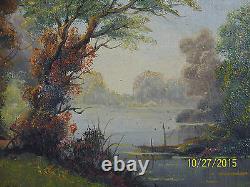 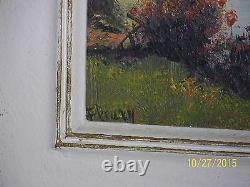 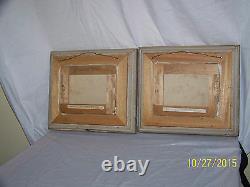 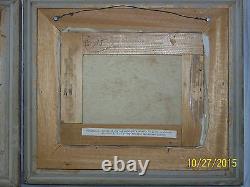 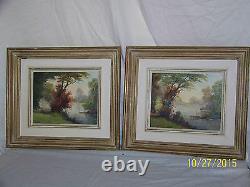 The one painting has a little flaking on the tree and the other is in EXCELLENT CONDITION! MEASURES: Framed- 15 1/2" x 13 1/4" - Unframed- 9 1/2" x 7 1/2" Both measure the same! BIOGRAPHY: Born in Le Havre, France, Albert Fleury became a landscape painter, muralist and teacher. In the United States, he first made a reputation in Chicago towards the end of the 19th century, arriving in 1888 to paint murals denoting the seasons Spring and Fall for the Chicago Auditorium. He also did numerous city street scenes and other landscapes of which the Chicago Art Institute had a special exhibition in 1900. He was a member of the Chicago Society of Etchers and the Chicago Water Color Society and was a teacher at the Chicago Art Institute. In 1892, many of his works were destroyed in a fire in the Athenaeum Building where he had his studio. In Paris, he had been the student of Henri Lehmann and Émile Renouf at the Ecole des Beaux Arts, and in 1880, he first exhibited at the Paris Salon. He also worked as officer of public instruction, Officier d'Instruction Publique. After emigrating to Chicago, he painted murals, gave private art lessons, and taught at the Chicago Art Institute. He was a member of the Chicago Water Color Club. He also painted in other parts of the country including Owatonna, Minnesota, where, towards the end of the century, he completed a mural commission at the Farmers National Bank, and in the West including Arizona where one of his paintings was Panorama of Grand Canyon from El Tovar. ----------------- BIOGRAPHY: ALBERT FLEURY: FROM SCWARTZ COLLECTION:Albert François (or Francis) Fleury was born in the French port city of Le Havre and studied decorative painting and architecture in Paris. Around 1888, he arrived in the United States to assist his former teacher Emile Rénouf on a large-scale painting of the Brooklyn Bridge. Shortly afterwards, Fleury was in Chicago with a commission to contribute to the decoration of the new Auditorium Building, a combined hotel, theater, and office building designed by the firm of Adler and Sullivan. In addition to a series of panels for the hotel dining room, he painted two large landscapes for the theater inspired by verses written by Louis Sullivan; the young painter Oliver Dennett Grover assisted with the execution. In addition to large-scale works, Fleury painted easel-size landscapes, first exhibiting with the Chicago Society of Artists and at the Art Institute of Chicago beginning in 1898, the year he joined its faculty. He conducted summer outdoor sketching classes, then the only form of instruction in landscape painting available to Chicago artists.

Turning his artistic attention to the city itself, Fleury showed a Chicago River scene in his debut at the Art Institute. There, his 1900 solo exhibition of forty-five oil and watercolor paintings, Picturesque Chicago, caused something of a sensation. The artist, critics enthused, had proven that even Chicago's most typically prosaic scenes, such as the polluted river and smoke-shadowed street canyons, could be artistically-even poetically-interpreted.

"It has remained for an academician of France to reveal Chicago's picturesque side to her most patriotic citizens, " remarked one writer, no doubt ignorant that the obscure James Bolivar Needham had been painting the river for a decade. Fleury's images were widely reproduced in newspapers, journals, and postcards and his work set an example for local artists, who subsequently competed to paint their city. Chicago remained the primary subject of Fleury's landscape painting. Active in several local artists' organizations, he was among the founders of the Chicago Water Color Club in 1907.

Fleury taught still-life painting and architectural rendering in the Art Institute's school until 1918. By that date, the artist had largely ceased exhibiting, although he continued to paint until shortly before his death at age seventy Five. This item is in the category "Art\Paintings".

The seller is "1kul57" and is located in this country: US. This item can be shipped worldwide.