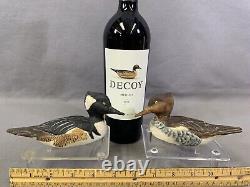 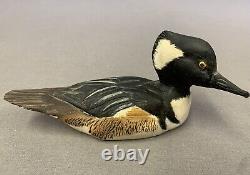 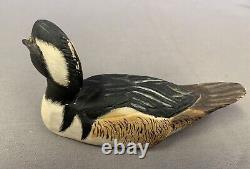 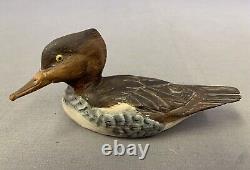 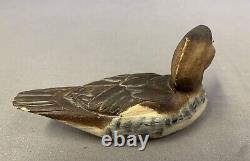 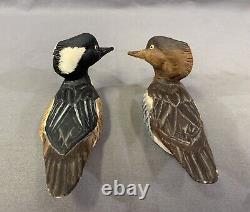 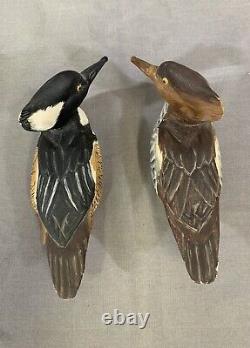 Putting some of my decoy collection up for sale. So please take a look.

Unfortunately, this well known Finger Lakes NY carver, Robert Gittens, Jr. Died of cancer in 2004 at the age of 56.

This pair of miniature hooded mergansers truly exemply his award winning talents. Gittens was a frequent ribbon winner at the Ward Brothers World Carving Championship Competitions. As mentioned, this is a beautiful pair of mergansers with "Gittens 1975" burned into the bottoms. Bob Gittens was not a carver who "mass produced" his carvings and they are actually not easy to come across. Below is a nice, informative article about Mr. Gittens and his carvings being on display at the Phelps Art Center, NY.

Excellent with paint rubs on back of the heads. N Inches (Length by Width by Height) & Weight. Approximately each 5.5 x 1.5 x 3 inches.

Weight: 0 pound 2 ounces. Article from the Life in the Finger Lakes magazine of Spring, 2007. As several hundred art enthusiasts filed through the opening of the Phelps Art Center in November 2006, many people exclaimed, Is that bird real? " or "It looks like it will fly off that branch.

Bob Gittens, a self-taught artist, was a true naturalist and conservationist. His passion for the outdoors resonated through his woodcarvings and paintings. He watched and studied birds in their natural habitat to see how their anatomy and feather patterns changed with the environment around them. Every detail, from the finest carved feather to the last brush stroke, was meticulously considered and placed. Bob learned to carve early in his life thanks to his grandfather.

He was constantly sketching, coloring and making simple toys and animals from small pieces of wood. Two people who greatly influenced him to start carving seriously were Gene McMillian and Mike Wavercak, both good friends of Bob's. Mike was also a carver, and Gene was a collector of art.

They saw the raw talent that Bob had and knew that he could become a very fine and well-known woodcarving artist. Eventually, Bob reached competition level artistry. He participated in and won many awards in several regional, state and national wildlife woodcarving shows. He won awards at the Ward Foundation National competition in Ocean City, Maryland, where only the best of the best compete.

Many collectors from all over the world bought his pieces. Early in his carving career, Bob concentrated on songbirds and waterfowl. Later, as his talent matured, he enjoyed carving hawks and owls. He was especially interested in them because of their size and beauty. As Bob got older, he shared his knowledge and love of carving with others, teaching weekly classes at his workshop and through adult community education programs.

He mentored and inspired several people over the years in their craftsmanship and artistry. As carving became more difficult due to several injuries, his passion switched to painting. Again, his love of the outdoors is apparent in his paintings of animals and Native American culture. Bob painted right up until he lost his battle with cancer in 2004.

The item will be carefully and securely packaged. Your satisfaction is my guarantee.