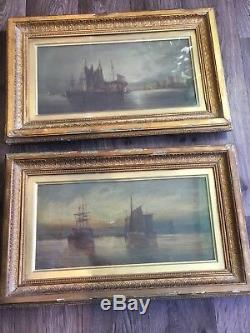 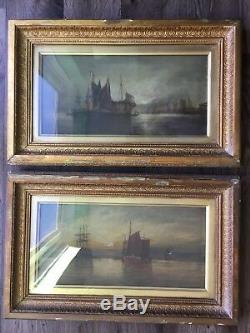 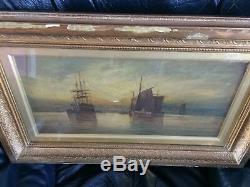 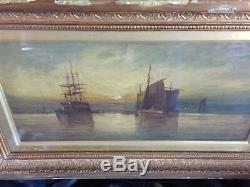 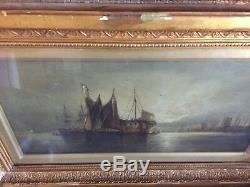 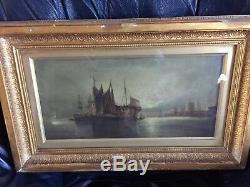 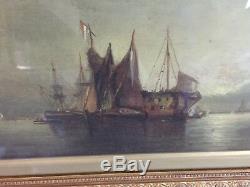 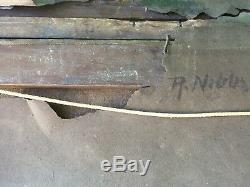 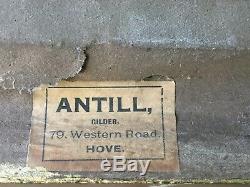 Richard Henry Nibbs (1816 to 1893). A fine pair of Antique paintings. 2x Oil on canvas depicting 19th century. Approx frame size 21 inch x 13 inch. The canvases are unsigned as is common for this artist. However one frame is signed to the reverse "R Nibbs" in the artists own handwriting.

Probably more reliably, the style of painting, medium used, techniques employed and even the type of frame from his home town of Hove (Antill was a local carver and frame maker, commonly used by Nibbs his labels still attached to the reverse) confirm these as originals and by R Nibbs. A highly sort after and desirable artist whose works are increasing in value (especially in the USA). Both canvases are in good condition. The frames although a little shabby (160 years old) remain sound and easily tidied (if so desired).

See photos and condition report. Richard Nibbs initially trained as a musician and he performed as a professional cellist with the Theatre Royal Orchestra. Born and raised in Brighton, Nibbs had ample opportunity for observing marine subjects and his natural talent and love of art led him to become a self-taught painter, facilitated by his inheritance of a considerable sum in 1840. His native Sussex coast was the subject of many of his works, although he also painted marine subjects in France and Holland. He exhibited at the Royal Academy.

Probably the most similar in style and size to these. The above are very recent prices for single paintings, to give you an idea of what this artist's works sell for. This is a real bargain so no offers please. CURIOSITYSHOPS CUSTOMER CARE PROMISE please read below. I offer you a high end product with unrivalled customer care.

You will receive a speedy, polite and friendly reply to any questions you may have. All efforts are made to describe an items authenticity as accurately as possible.

In some cases we seek an independent specialist opinion for confirmation. The condition of an antique is subjective and the photos form an integral part of the description, however any damage or flaw of significance will be mentioned. IMPORTANT: I treat others as I would wish to be treated. The item "2x PAIR Fine Antique art Richard Nibbs RA 19th century oil canvas Ship maritime" is in sale since Thursday, April 11, 2019.

This item is in the category "Art\Paintings". The seller is "curiosityshop5" and is located in Croydon.